It has been no secret that the big money for automakers, no matter if their headquarters are in Detroit, Stuttgart, Johannesburg, New Zealand or the South Pole, is in China. A recent move this week by Volkswagen to spend $2.7 billion for two new plants in the sizable country reinforced this fact.

It’s even more significant when you consider that this investment is only a portion of the $24.48 billion Volkswagen will invest in the country by 2018. That’s a ton of money to spend in just four years, so you better believe that German Chancellor Angela Merkel went with VW CEO Martin Winterkorn to China on Sunday.

Why is China such a player? Because that’s where the future is. As you can tell from VW’s balance sheet in fiscal year 2013, Asia is not Volkswagen’s biggest market today. But if projections hold steady, China alone will have 1 billion licensed drivers within 10 to 15 years. Once Volkswagen’s four years of investment are complete, the company will be producing 4 million cars annually in China.

Big investment comes with the hope of big returns, which would give VW the cash stability to plan its next big move. Although Volkswagen hopes to sell a lot of cars in Asia, it’s unclear whether its profit margins in that continent will equal those found in North America or Europe. 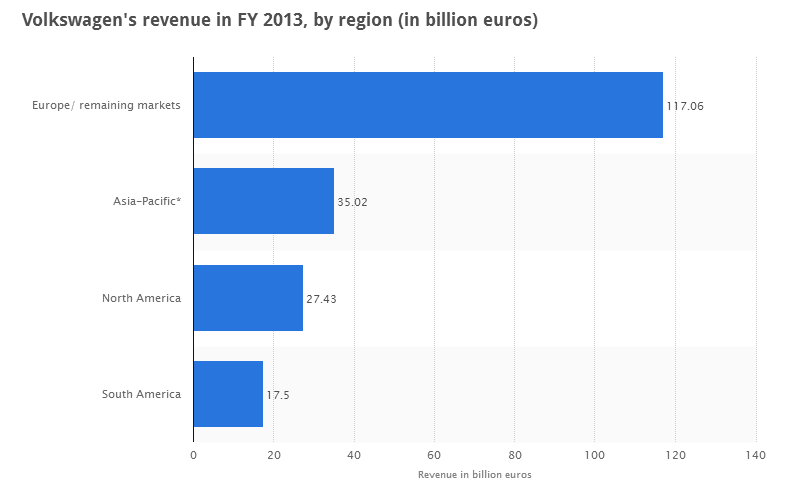 In this chart, it’s clear that when evaluating revenue, as opposed to units sold, Europe is currently the dominant player for VW. With new plants coming online in Mexico soon, it seems that Volkswagen intends to diversify its revenue streams.

The average age of a car in the U.S. is around 10 years old, which means that dealerships are increasingly making more off maintenance in their service departments. When it comes to sales of brand-new cars, however, the ideal market appears to be China.